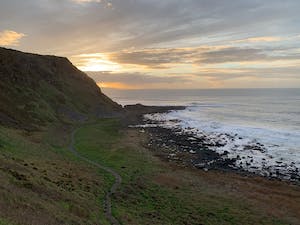 The beautiful landscapes of the island of Ireland offer the road trip of a lifetime around every corner. Here are the five top road trips in Ireland!

1. The Wild Atlantic Way
At over 2,500 km long, and stretching from Malin Head in County Donegal to Kinsale in County Cork, this spectacular route skirts the island’s Atlantic coast and delivers breathtaking views around every bend. Pull over on a cliff edge and feel the sea spray in your face, walk for a while on a golden beach, go island-hopping off the coast, and indulge in the island’s finest seafood as you immerse yourself in the wild, rugged beauty along this unforgettable route.

Known as ‘one of the world’s great road journeys’, the Causeway Coastal Route winds its way from Belfast to the historic walled city of Derry~Londonderry-or vice versa. Through picture-postcard villages, past castles, and ancient ruins, the route takes in some of Northern Ireland’s most iconic sights including the Giant’s Causeway, the Carrick-a-Rede rope bridge and the 400-year-old Bushmills Distillery.

3. The Ring of Kerry and Skellig Islands

The stunning Ring of Kerry is a circular loop around the Iveragh Peninsula passing through some of the most amazing landscapes on the island. The wonderful lakes of Killarney give way to the mountains of MacGillycuddy’s Reeks and the peninsula is scattered with picturesque and vibrant towns and villages. Off the Ring of Kerry lies the sixth-century island monastery of Skellig Michael, now globally famous as a filming location for the latest Star Wars blockbuster.

4. The Sperrin Mountains
Northern Ireland’s largest mountain range is one of the least explored on the island. A car tour through this roller-coaster landscape is a must. Four spectacular routes in County Tyrone and County Londonderry offer breathtaking scenery and ancient monuments galore. National Geographic praised these roads for their “wild beauty, ideal trails and dreamy villages” in its list of the Top 101 Scenic Drives in the World.

5. Ireland’s Ancient East: The Celtic Coast
Peel back layers of history as you travel the Celtic Coast route from County Wicklow to County Cork and discover the splendour of eighteenth-century stately homes, the treasures of Viking settlements and the remains of Ireland’s earliest Christian settlement. Among the must-see stops on the route are the magnificent Powerscourt House and Gardens, atmospheric Glendalough and the Viking city of Waterford.