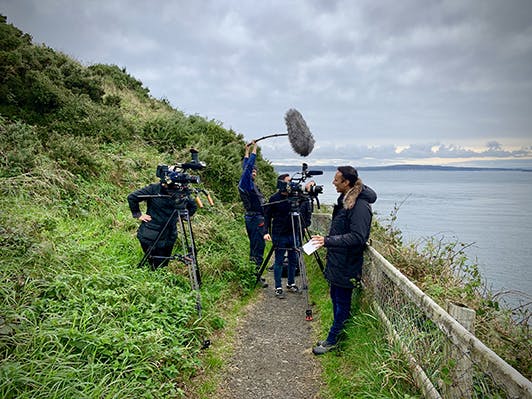 Our top selling tour, the Highlights of Northern Ireland, is to feature on a brand new travel show to be broadcast at peak viewing times on the UK’s Channel 5 in January 2020.

The success of this tour and the glowing reviews on TripAdvisor brought it to the attention of Producer/ Director Vanessa Williams, of Viacom International UK, producers of the new show. She invited me to take part in the show as she believes the tour will have broad appeal, but will be particularly attractive to their targeted 0ver-50 demographic.

Filming on the Northern Ireland segment took place over two days at the end of September. Day one filmed in Belfast City, while day two was given over to the coast and countryside of County Antrim. The series will feature different talent from the world of show business each week and I had the honour of hosting Chris Bisson, who stars as Jai in Emmerdale.

Our day started off at the Culloden Hotel & Country Club at Cultra, outside Belfast. Our piece to camera before leaving took in the majestic backdrop of Belfast Lough and the distinctive profile of Cave Hill. The day was helped by pin sharp lighting conditions and this enabled us to capture the region in perfect detail.

Leaving Belfast, we travelled towards Larne, leaving the main road just before the town. This took us upwards into the hills and mountains around Cairncastle where we stopped to film a segment at the lookout point where the first episode of Game of Thrones was filmed. We had clear views down to the coastline and of the Maidens – the small islands offshore – and across to Scotland. This in particular was thrilling for the production team on their first visit to Northern Ireland.

The Green Glens of Antrim

We then travelled down the winding road through Glenarm, the first of the Nine Glens of Antrim. Chris and I were in conversation in the rear with GoPro looking on, with an additional unit attached to the exterior of the vehicle to capture the views. The sound engineer and colleague followed behind in a second vehicle. We stopped in the village of Glenarm itself, taking in the Barbican at the Castle and getting to know a little bit about the long history of the ancient Kingdom of Dalriada.

Our next stop was at the beautiful Glenarrif – the Queen of the Glens – where we filmed at the lower waterfall which was in full flow for the occasion. A couple from London were taken by surprise when Chris stopped to interview them about their trip to the region – an unexpected TV appearance for them both.

Next stop was for lunch at Marconi’s Bar & Bistro at the Marine Hotel in Ballycastle. Here we enjoyed their famous Seafood Chowder and Chris did a piece to camera outside – which caused a bit of a stir among the locals – celebrating the fresh food offering that is so important to today’s travellers. Our island-wide food offering is being celebrated throughout September, October and November 2019, so it was fitting that we stopped off at one of the best seafood restaurants in Ireland.


We then headed a short way up the road to Kinbane Head. Kinbane is one of those out of the way places that is always a delight for participants on this tour, with its majestic coastal location and the nearby cliffs and caves and uninterrupted views across to Rathlin Island and Scotland. Here Chris delivered a monologue to camera – you’ll just have to wait for his thoughts when the show is broadcast – where he reflected on the beauty and tranquility of our coastline and his amazement at looking across to the Mull of Kintyre from the Irish coast. 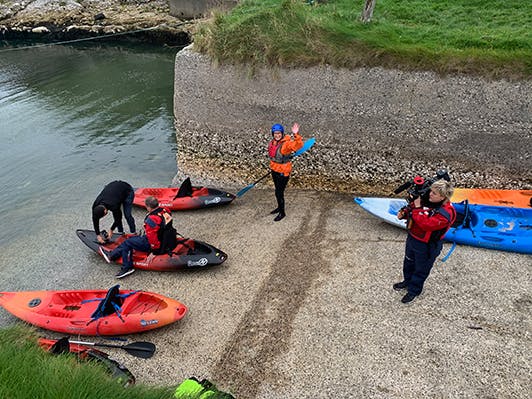 Preparing the Cameras for the Sea Kayaking Segment at Ballintoy Harbour

A visit to this stunning coastline would not be complete without enjoying one of the many water based activities available on the sea. Portglenone Paddlers were delighted to get Chris and the director out on the water at Ballintoy Harbour, where they were able to get a different perspective of our amazing coastline. Your author was equally delighted to watch their efforts from the shore line.

With filming completed it was time to head back to the Culloden and as we got to the dual carriageway at The Frosses, low and behold didn’t the heavens open. But a great days filming was in the can and a contented presenter and crew retired to their hotel for dinner and no doubt a drop of the black stuff and a half’un. I was happy to leave them to it. I had to do it all again next day. Without the cameras.

Note: Holidaying With Jane McDonald will be broadcast on Channel 5 in the UK in January and February 2020. Details of the exact date of broadcast for this show will be available at a later date.

A fully escorted private luxury day tour taking in the highlights of Belfast, the beautiful Causeway Coastal Route, the Giant’s Causeway and the Glens of Antrim, with a few surprise destinations off the beaten…

Choose from three different Ireland walking tours depending on the length of time, what nature or history you’d like to see, and experience beautiful Rathlin Island on foot.