Slemish Mountain – Off the Beaten Track 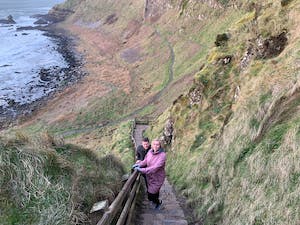 A Journey Around our Holy Mountain
A place must have a special ingredient to have become a ‘constant’ in the life and work of the Nobel Poet, Seamus Heaney, but Slemish Mountain in County Antrim is one such place. He often said that the spiritual boundaries of his native South Derry were marked by Slieve Gallion to the West and by Slemish to the East, two substantial landmarks in an otherwise unremarkable landscape.

In many ways, this mountain has always had a pull for the inner soul, sitting steadfast and proud on the skyline for millennia, but taking on new resonance with the onset of Christianity in Ireland. St Patrick found himself converted to God when he was enslaved on its summit as a sheepherder in the 6th century, an association that prevails to this day. But whatever your outlook or faith, your eye will be drawn to this craggy volcanic remnant and you will be compelled to get closer – and even to climb to its summit.

Seamus Heaney could see both these summits on his walk to Anahorish Primary School in the 1940s. but I would be uncertain if you could today, such as being the proliferation of woodland and hedgerows. However, like him, I am compelled occasionally to visit both places and on a recent Sunday afternoon in late February, I found myself on the quiet country lanes around its base with my camera, determined to capture it from all possible angles.

That distinctive ‘camel hump’ can be deceptive as you will see when you work your way around the soft farmland and high peat bogs that surround it. As a child, I always imagined it to be circular, donut-like almost. But it was only fairly recently that I realised that it wasn’t round, but oval in shape and looks very different from contrasting vantage points.

A Dormant Volcano
For those of you with an eye on geology, Slemish is the remains of the plug of an extinct volcano. The plug is made of olivine dolerite and was formed during the Palaeocene period of the Earth’s geological history. Its distinctive appearance —its upper reaches are very steep and rugged, in contrast to the tidy fields on its lower westward-facing slopes and the relatively flat bogland to the east— causes it to dominate the landscape for miles around.

It also enjoys the designation of an Environmentally Sensitive Area which helps protect the otherwise fragile animal and plant communities that inhabit its slopes. That means that you can appreciate its geology and wildlife as you make your way up its twisty eastern way-marked way. On the summit, on a clear day, you can see as far away as County Donegal, the Scottish coast and almost the entirety of the province of Ulster.

Perhaps it was this latter that converted Patrick to Christianity and not his dismay at being enslaved in this often hostile place. You too will find some spiritual reawakening in this most startling of places. I certainly have.